This week golf celebrates the first of it’s four “majors.”  The Masters tournament at Augusta National Golf Club in Georgia is on the PGA schedule every year during the first full weekend in April.  It was first played in 1934.  The course, and by extension the club, will be fawned over and spoken about in reverent tones on CBS. 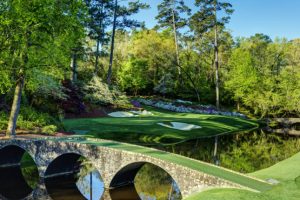 But shouldn’t we be repulsed by the past discrimination which was as natural to it’s membership as the famous magnolias and pine straw.  By all accounts the environment has not really changed very much.  The story is not pretty.

Augusta kept black golfers out of the Masters tournament for 40 years. Lee Elder was able to play in the 1975 Masters not because he was invited.  It was only because he won a PGA tournament (1974 Monsanto Open) which granted automatic qualification to the Masters that he gained entrance.

But it would be another 16 years before a black man would be invited for club membership.

Augusta did not admit its first African-American member until 1990, at a time when controversy was erupting over Shoal Creek, an all-white Alabama club where the PGA Championship took place only after it admitted its first black member.

While limiting membership to white males for so long it also required all caddies to be black.

“As long as I’m alive,” said Clifford Roberts, one of the club’s founders in 1933 and a longtime Masters chairman, “all the golfers will be white and all the caddies will be black.”

No women were admitted to Augusta as members until 2012.  In August of that year, it admitted its first two female members,Condoleezza Rice and Darla Moore.

The reality is clear:  Augusta had to be dragged kicking and screaming into changing their membership criteria.  And it is still barely acceptable.

In my opinion the club should be able to admit (and not admit) whomever they want.  They are a private club and should control their membership requirements.   If it were up to me I would overturn the “public accommodation” findings in the 1964 Civil Rights Act and other state provisions.  In a truly free society a business owner should be allowed to decide with whom he trades.  But the other side of that right is the freedom of potential customers to take their business elsewhere.

Few are the private golfers who would turn down an opportunity to play Augusta.   Many are willing to overlook past transgressions, and current practices, for a chance to experience Amen Corner, et al.

But shouldn’t you ask yourself whether you would patronize a restaurant or other private business which was so discriminatory?

Lefties heads are exploding over a statement which was read on air by many news anchors at Sinclair Broadcast Group owned television stations.  The blogosphere and sites run by the usual liberal suspects are outraged.  Here is a typical headline:

That is from syracuse.com which one would expect to be a straight shooting news source.  But why the visceral reaction?

Here is the actual script which was personalized by each station inserting appropriate names and call letters.

Hi, I’m [name] with [station]. Our greatest responsibility is to serve our communities. I am extremely proud of the quality, balanced journalism that [station] produces, but I’m concerned about the troubling trend of irresponsible, one-sided news stories plaguing our country.

The sharing of biased and false news has become all too common on social media. More alarming, some media outlets publish these same fake stories without checking facts first. Unfortunately, some members of the media use their platforms to push their own personal bias and agenda to control exactly what people think. This is extremely dangerous to our democracy.

At [station], it is our responsibility to report and pursue the truth. We understand the truth is neither politically left nor right. Our commitment to factual reporting is the foundation of our credibility now more than ever. But we are human, and sometimes our reporting might fall short. If you believe our coverage is unfair, please reach out through our [station] website by clicking on “Content Concerns.” We value your comments and we will respond back to you.

We work very hard to seek the truth and strive to be fair, balanced, and factual. We consider it our honor and privilege to responsibly deliver the news every day. Thank you for watching, and we appreciate your feedback.

Not sure what is “right wing” about committing to pursue and report truth.  You have to wonder if any of the people freaking out about this actually read the statement.  Or did they just see a leftie criticism and decide to use the statement as their own “fake news.” 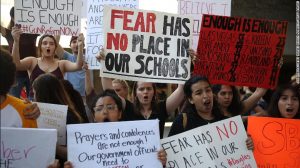 Parkland HS students returning to school after spring break were not happy with some of the safety improvements, including a change to only allow backpacks if they are clear.

Students are learning what happens when strangers show up and say “We’re from the government and we’re here to help you.”  They end up pushing for post-shooting “solutions” such as low capacity magazines, waiting periods,  or stronger background checks, none of which would have prevented this heinous shooting.

“It’s like putting into place all these rules that wouldn’t have changed anything,” Robinson said.

H.L Mencken said that people might be sorry if they got what they wanted, Democracy, “good and hard.”

Democracy is the theory that the common people know what they want, and deserve to get it good and hard.