The Washington Times has a story on the letter which Dr. Richard Lindzen sent to the Trump White House.
Story is here:  MIT’s Richard Lindzen says policies cause economic harm with ‘no environmental benefits’

Letter to Trump is here.

The petition is signed by 300 scientists.  This is a real number unlike the phony “97% of scientists agree” which you hear parroted so often.

Here is the petition:

We urge the United States government, and others, to withdraw from the United Nations Framework Convention on Climate Change (UNFCCC). We support reasonable and cost-effective environmental protection. But carbon dioxide, the target of the UNFCCC is not a pollutant but a major benefit to agriculture and other life on Earth. Observations since the UNFCCC was written 25 years ago show that warming from increased atmospheric CO2 will be benign — much less than initial model predictions.

Remember when Senator Elizabeth Warren (D-MA) was censured on the floor of the US Senate for breaking the rules?  Remember how it was a big story and the MSM spun it as a terrible thing?

Well, it’s happened again.  Let’s see how it is covered this time.

We were in the middle of math class, so I gathered up a group of kids and asked Anders if he minded working in the hall with them. He readily agreed, and off they went. It wasn’t until math was almost over that I realized that his group was still in the hallway. When I peeked out there to see what was going on, I saw an amazing sight: Anders was on the floor, surrounded by these little third-graders, intently working on their math activities. Not one child was goofing off, everyone was very engaged and they were almost finished with the whole assignment! It was then that I knew there was something special about Anders. 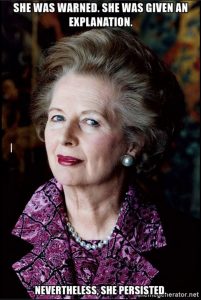 Protestors destroy pristine ND environment to protest low probability that the environment will be damaged in future https://t.co/kctRxFtiOP

Senator Rubio (R-FL), as part of the debate regarding the Rule XIX violation by Senator Elizabeth Warren (D-MA), opined on the current state of political debate in general.

TBF he did not excuse his own behavior in some cases where he went over the line as noted by the Miami Herald:

Amid the debate, Rubio gave a lengthy speech. “We have become a society incapable of having debates anymore,” he said, adding figures in both parties, himself included, have engaged in heated rhetoric.

Patriot’s defensive coordinator Matt Patricia was pictured wearing a Goodell Clown tshirt while deplaning upon the team’s return to Boston following their win on Sunday.

Kind of surprised that anyone connected with the Patriots would “support” Barstool or David Portnoy.  We can only guess that Patricia doesn’t know, or remember, the history between the crude site and Tom Brady.

You may recall that it was Portnoy, in 2011, who posted a disgusting photo of Brady’s son.

Some perspective is appropriate.  And please note that Barstool/Portnoy and the word “appropriate” are words rarely found in the same thought.  The BS/P combo, and it’s element, are known for their crude, inappropriate, 12 year old teenage boy take on sports commentary.

Back in 2011 Portnoy made a decision to post a picture of Brady’s young son on a Costa Rica beach.  Benjamin was sans-swimsuit with his mother Gisele.  The photo was explicit in it’s view of the young boy’s body.  Larry Brown’s Sports site gives some details of the post:

The post was titled “Check out the Howitzer on Brady’s Kid,” and it shows a close-up picture of Tom Brady’s son in profile. Portnoy then presents some commentary on the naked two-year-old child’s large member and uses it as a way to compliment Tom Brady on his latest world conquest. (emphasis added)

But this is what BS/P markets.  Crude, disgusting, inappropriate.  Another Boston sports site said at the time:

Barstool, by nature, is a profane site.

In the end BS/P pulled the photo.  WEEI banned the entities from their airwaves.  But time has a way of things fading.  Make no mistake about it, BS/P has not faded.  They are as blatantly crude today as they ever were, maybe more so.

At the time of the photo Massachusetts Lawyers Weekly weighed in with their view of the legal side:  The legal fallout from the Barstool Sports-Brady controversy

It seems that BS/P will do anything that brings clicks, and dollars, to their account.  Portnoy has been pictured holding a sign comparing Goodell to Hitler.  He was chastised by 98.5 The Sports Hub’s Michael Felger for wishing bodily harm to Goodell.

Nothing is off limits, it seems.  We have a great history in the US of freedom of the press.  It is a critical right which should not be limited for frivolous activities.  But within that context we have the right as consumers to shun those who are using it unwisely.

Which is why I am a little surprised that Patricia and others would “support” by buying, wearing or otherwise publicizing BS/P and their crude view.

Another loony leftie is calling for resistance to the free and fair election which Donald Trump won.

WAKE UP & JOIN THE RESISTANCE. ONCE THE MILITARY IS W US FASCISTS GET OVERTHROWN. MAD KING & HIS HANDLERS GO BYE BYE❤❤❤❤ https://t.co/Y2WZbL012A