Patriot’s defensive coordinator Matt Patricia was pictured wearing a Goodell Clown tshirt while deplaning upon the team’s return to Boston following their win on Sunday. 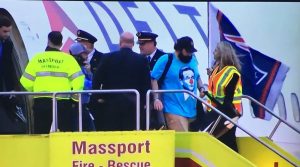 Kind of surprised that anyone connected with the Patriots would “support” Barstool or David Portnoy.  We can only guess that Patricia doesn’t know, or remember, the history between the crude site and Tom Brady.

You may recall that it was Portnoy, in 2011, who posted a disgusting photo of Brady’s son.

Some perspective is appropriate.  And please note that Barstool/Portnoy and the word “appropriate” are words rarely found in the same thought.  The BS/P combo, and it’s element, are known for their crude, inappropriate, 12 year old teenage boy take on sports commentary.

Back in 2011 Portnoy made a decision to post a picture of Brady’s young son on a Costa Rica beach.  Benjamin was sans-swimsuit with his mother Gisele.  The photo was explicit in it’s view of the young boy’s body.  Larry Brown’s Sports site gives some details of the post:

The post was titled “Check out the Howitzer on Brady’s Kid,” and it shows a close-up picture of Tom Brady’s son in profile. Portnoy then presents some commentary on the naked two-year-old child’s large member and uses it as a way to compliment Tom Brady on his latest world conquest. (emphasis added)

But this is what BS/P markets.  Crude, disgusting, inappropriate.  Another Boston sports site said at the time:

Barstool, by nature, is a profane site.

In the end BS/P pulled the photo.  WEEI banned the entities from their airwaves.  But time has a way of things fading.  Make no mistake about it, BS/P has not faded.  They are as blatantly crude today as they ever were, maybe more so.

At the time of the photo Massachusetts Lawyers Weekly weighed in with their view of the legal side:  The legal fallout from the Barstool Sports-Brady controversy

It seems that BS/P will do anything that brings clicks, and dollars, to their account.  Portnoy has been pictured holding a sign comparing Goodell to Hitler.  He was chastised by 98.5 The Sports Hub’s Michael Felger for wishing bodily harm to Goodell.

Nothing is off limits, it seems.  We have a great history in the US of freedom of the press.  It is a critical right which should not be limited for frivolous activities.  But within that context we have the right as consumers to shun those who are using it unwisely.

Which is why I am a little surprised that Patricia and others would “support” by buying, wearing or otherwise publicizing BS/P and their crude view.