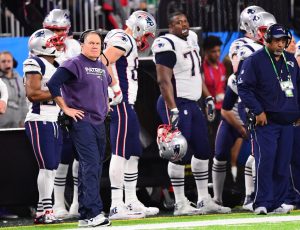 Multiple reports are appearing that Butler was not on the team plane from New England to the Super Bowl in Minneapolis because of an illness.  Showing up a day late also meant he missed a day of practice.  Then he also had a “rough” week of practice once he did get on the field and was late for several meetings.  And he apparently missed curfew at least once, and had a meltdown with a member of the coaching staff.

Just spoke with Malcolm Butler on a number of topics, including his Super Bowl benching. He hasn’t spoken with Bill Belichick since they departed Minnesota but surmised why he didn’t play that night: pic.twitter.com/ccCsoCLnLj

According to the Providence Journal:

Butler stayed back in Massachusetts when the team arrived earlier this week. After having flu-like symptoms, he visited a local area hospital multiple times before getting clearance to join his teammates out north.

#NFL #SuperBowl Patriots/Eagles – Bill Belichick benched Malcolm Butler due to arriving late to team hotel, was also found with possession of marijuana on Thursday evening. Belichick was “fed up” with these actions and took a bold stand. (Closed source)

My understanding is the benching of #Patriots CB Malcolm Butler happened because of a perfect storm of issues: Sickness, a rough week of practice, and a minor rule violation believed to be related to curfew. A complicated matter. pic.twitter.com/TmUJgkHpsZ

All of this resulted in Coach Bill Belichick deciding to sit him for the biggest game of the year.  Was BB correct in sticking by the team rules?  By all accounts he has very few team rules:

Butler broke all of these rules.

If he was sick and showed up a day late in Minnesota how was he able to be out at night?  Shouldn’t he have been resting?  As a professional athlete he makes a lot of money and has a lot of off season time.  He can go out when he wants during the off season.  But the Super bowl is a business trip.  Deciding to party rather than rest was putting himself above the team.

Why dress him if he wasn’t going to play? With multiple injuries and a shortage of bodies he was an emergency only player.  If Rowe or Bademosi got knocked out of the game Butler probably would have played more.

I can’t remember if it was Rowe, Harmon or Bademosi who commented after the game that they had gotten more reps in practice along side Gilmore.  But there was an answer from one of them talking about this.  So it wasn’t a complete surprise that Butler’s playing time would be limited.

Belichick is looking at the long view.  The reason they win so much and get to the Super Bowl is because they have discipline.  The players buy-in or they are gone.  Breaking the few rules they have results in consequences.  Belichick is willing to stand by the rules even in the biggest game of the year.

He has consistently leaned on his “dependable” players.  Not necessarily superstars but guys who will be there.  It doesn’t mean they will be perfect but often others will support them and together the team will prevail.  This is how Butler got into the SB v Seattle and made the game winning interception.  He had proved to the coaches through practice time that he could be depended on.

Imagine if that game had turned out different, that the Seahhawks had handed off to Lynch and ultimately won the game.  Many would have likely questioned why Butler was in the game.

Belichick’s view of the big picture, along with his attention to details, almost always pays off.  He knows it will pay dividends in the long run.  If he gave in he would eventually have no rules and chaos would reign (See Steelers).  In the end this was not about Belichick’s ego or pride.  It was about a team concept of supporting each other and enforcing the rules.

The fact that Belichick was willing to stand by the team rules in the biggest game of the year only proves to strengthen his credibility.